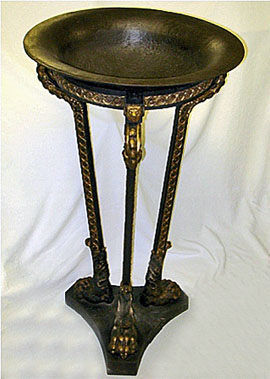 A section of William Holman Hunt’s painting of London Bridge (1863, Ashmolean Museum, Oxford) shows one of the 100 incense burners filled by Perfumer Eugene Rimmel that lined the Bridge to disguise the less than fragrant aroma of the Thames on the evening of 10 March 1863, when Prince Edward (1901 became King Edward VII) married Princess Alexandra of Denmark.  Eugene Rimmel’s perfume was a novelty in public festivals, having usually been used to purify and perfume the air in ball rooms, theatres, Windsor Castle etc. On this special occasion Rimmel’s perfumed oils were burnt in tripods and lasted for three or four hours through wind and rain. The streams of incense floated through the air, pleasing and quietening the eagerness of the jostling crowd and calming their soaring spirits.

William Holman Hunt’s wonderful painting was shown to our members by speaker, William Forrester of Guildford, who gave a talk on Victorian London and informed us that he believed none of the burners was known to have survived. Our President Laila Bradley remembered seeing one of the burners as a centrepiece in Scarborough’s Valley Gardens Lily Pond, where it had been for over 100 years. John Sharpin, the first lessee of the Crown Hotel between 1844 and 1857 and twice Mayor of Scarborough, purchased the burner on one of his trips to London and presented it to the town to mark his mayoralty in 1873.

Our President and the Scarborough Committee enthusiastically tracked down the missing burner in Scarborough Borough Council’s storage area, where it had been since 1984, in a state of disrepair. For our Millennium Project the Committee began fundraising to pay for the burner’s restoration. Conservator Alison Walster from Sheffield spent over a month working on the burner to return it to its former glory in the year 2000. Alison’s research revealed that the burners were made by William Addis, Ironmongers of Leicester Square.

When the 19th century perfume burner, with its 5ft iron bowl on an ornate tripod, was finally beautifully restored it took pride of place in The Crown Hotel’s reception area for many years. In 2013 the perfume burner was transferred to its current home in Scarborough’s Town Hall Reception, where all the civic dignitaries to the town can see it on display.