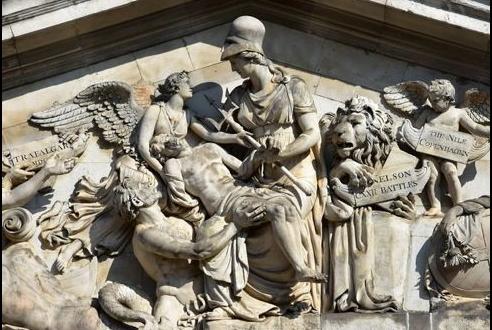 On Wednesday, 17 February members of The Arts Society Scarborough had the opportunity of watching the second of the 2021 lectures from the comfort of their own homes, via Zoom. Before the lecture our Chairman, Colin Langley, paid tribute to the work of David Bryden, who was relinquishing his responsibilities for the Society’s website after years of service. In future this mantle would be worn by David Henderson.

The subject of this month’s talk was “Eleanor Coade and her Stone”, by Dr Angela Smith. How many of us, I wonder, have looked at public monuments or visited Royal palaces, stately homes or public buildings, and wondered at the skill of the sculptor in working hard stone with such delicate artistry? This lecture by Dr Angela Smith will generate a new question in our minds; could this be a product of Coade Stone, an artificial material more like an extremely durable ceramic than quarried stone, and formed in a mould, just like pottery, but visually indistinguishable from an individually carved stone sculpture? Dr Smith took us on an engaging journey through the history of  Coade Stone, and showed us images of a number of well-know sculptures made from it.

Eleanor Coade was born in Exeter in 1733, the daughter of wool merchant George Coade. The family moved to London, and after the death of her father  Eleanor together with her mother went into partnership in 1769 with a Daniel Pincot in a business manufacturing artificial stone, based in Lambeth. There had previously been attempts to make this kind of material but none had succeeded in developing a durable product with a satisfactorily convincing finish. It seems that Eleanor was responsible for the formula which overcame this shortcoming. The constituents of Coade Stone were crushed flint, quartz, ball clay, and grog (ground-up terracotta), and Eleanor perfected the formula with the addition of silica or crushed glass. The material was shaped in re-usable moulds, some of which have been discovered recently, and small fingerprints on them suggest that child labour was used in their production. Larger items were made in individual moulds and con-joined by means of cast-iron dowels. The product was then fired In kilns known as enamel or muffle kilns, coal-fired, for a period up to 4 days. One such contemporary kiln, incidentally still exists in Devon. The finished article was buff-coloured, and could be painted. Dr Smith commented that the workers were paid one guinea a week – generous remuneration in those days. By 1784 the Coade catalogue comprised some 750 items. As well as larger monumental pieces the company produced items such as decorated keystones for arches in church buildings, and garden ornaments. A showroom for the Coade product, Coade’s Gallery, was opened in central London in 1799.

Eleanor was clearly the dominant partner in the company. Although she moved her own residence to a grand house,Belmont, in Lyme Regis (itself heavily decorated with a Coade stone facade) she retained close control of the company. She dismissed Daniel Pincot and in1799 took on her cousin John Sealy, a modeller, as a new partner. She also engaged another distant relative, William Croggan, a sculptor by trade. Later she also took on John Bacon, a designer who had previously worked for Wedgwood. John was responsible for designing much of the subsequent output of the factory.

Throughout the talk Dr Smith showed examples of the Coade stone product line in different environments. Notable examples were in St George’s Chapel, Windsor, Ham House in Richmond, Twinings shop in The Strand (recently restored), the pediment of the Old Naval College in Greenwich, Beverley Minster, the Royal Pavilion in Brighton, and even Buckingham Palace. Widely used in classical garden design Coade items are to be found, for example, in Kew Gardens (animal statues over the entrance gates) and at Croombe House, Worcestershire. Coade stone was popular with the eminent landscape gardeners of the time, and numerous examples of Coade Stone urns and other decorative items are to be found throughout the country, including some in North Yorkshire. Coade Stone was also exported, among other countries to Russia, USA and South America.

Eleanor Coade was one of the most prominent and successful business women of the Georgian era. Interestingly, in her will Eleanor left several legacies to women friends with the proviso that their husbands were not to have access to the money. She died in1821, never having married or having had a partner. She was always known as Mrs Eleanor Coade but this seemingly was a courtesy title bestowed on eminent unmarried women at that time. Dr Smith overcame the strangeness of the unfamiliar medium of a remote lecture to give us a most interesting insight into an unusual aspect of 18th century life.

PhD from the Warburg Institute, London University. Author of numerous articles and several books including A Timeline of Art History (2013). Experienced lecturer who has taught for several universities. Catalogued paintings in galleries for the National Inventory Research Project. Has led a number of cultural tours on the continent and has lectured for several cruise lines. Regularly runs courses of study days for The Arts Society on subjects including ‘Women artists down the centuries’ and English church art and architecture. Has contributed to television programmes, most recently an episode of Digging up Britain’s Past.